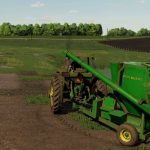 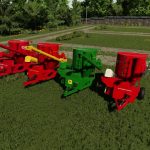 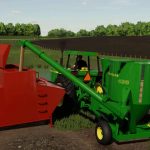 Originally a part of the Westby Wisconsin 4x map, I’ve finally redone this mod and made it a standalone mod, UDIM’d the model, and resolved a potential conflict with Maize Plus.

Converts soybean, oat, barley, wheat, corn, dry ear corn, or rye to mineral feed. Also works with dry corn mods that use either “corndryer” or “maize2” as the fill type. Throws a warning “invalid filltype” if you’re missing any of those fill types in your map/save, but DOES NOT affect gameplay. If I need to add more filltypes I could in an update.

Works to fill the creep feeders on Westby 4x the same as before. Works with the small mineral feed bin I released on itch as well, which was recently updated if you didn’t see.

Works with Maize Plus, but does not use any of its new fill types like “graingrist”

You now have a choice! 4 different brand skins available. The original Gehl 125, the New Holland 353 as released by Diniz Farms in FS19, the John Deere 400, and the International 1150 done by JCL.

Shout outs to Rooster Mods for allowing me to use wheels and tires he modelled, its amazing the visual difference it makes! Also to Tired Iron Modding for the custom dirt map, it looks great! Squatch_Monkey for helping me bounce stuff off him and making sure that it works how we plan and want. And lastly I need to thank JCL’s Farm Equipment for the awesome looking IH decals, proving to me that Giant’s Icon Generator isn’t completely broken, and generally just going over things and polishing things like the true bro he is. Thanks guys!