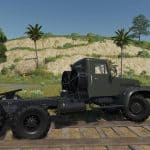 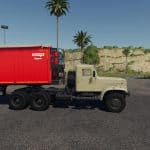 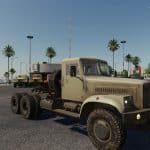 KrAZ 258 – semi-truck manufactured by the Kremenchug Automobile Plant (KrAZ), produced in the period from 1966 to 1977.
The KrAZ 258 vehicle is designed for transportation of goods as part of a trailer with a total weight of up to 30 tons.
These vehicles received the wheel formula 6×4.
KrAZ 258 were widely used as fuel trucks.
Thanks to its robust and reliable design, as well as excellent operational characteristics, KrAZ 258 is able to transport very heavy loads without any difficulties.
KrAZ 258 has established itself as an extremely hardy and reliable vehicle.