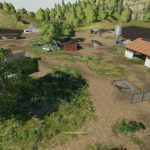 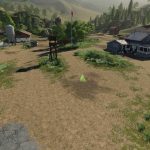 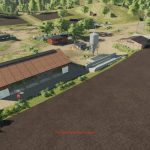 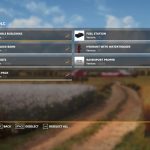 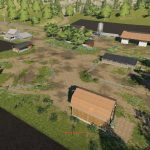 Hi. This is my first ever published map, been playing FS from 13 onward. In previous games i always felt EU maps were better, but this time around, US map Ravenport is absolutely fantastic. Not however ingame placeable system, which is a pain in the ***. So i decided to edit the map the way i want it, place it down how i see it and edit the terrain.

What i hated from previous versions is you had animal sheds too far away from your farm, and that was always my main goal, to have everything on my farm.

What you will find in my edited map
-Large cow pasture
-Large sheep pasture
-Small horse pasture
-Small chicken coop.
-NO PIGS. (I may edit and add them in the future, its just i dont like them in game.)

**INSTALL= UNZIP the whole file in your mods folder! If you have mods installed with a name like in the file, change your mod name.

*New farmer mode gives you my edit. If you want hovewer my placements and vehicles in “Farm Manager” and “Start from scratch” mode, just edit defaultFarmProperty=”true” to defaultFarmProperty=”false” in defaultItems.xml and defaultVehicles.xml in Ravenport_PROPER map. Use Notepad++ for this to do it instantly.

Anyway, that’s it. My first uploaded map, hope you like it, would like to hear from you and maybe i will update in the future. For any bug or mistake just comment down below. And once again, all credits for mods used to their respective owners.
Happy Farming and greetings from Slovenia!