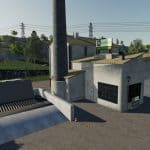 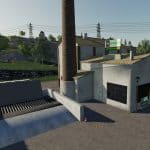 This placeable factory pack has been created for console gamers, so that their gaming experience go a little further.

IMPORTANT NOTE: This mod can only be used together with compatible maps, and at the moment it will only be available for maps (Westbridge Hills, Hagenstedt, The Old Farm Countryside, La Coronella and La Coronella 2.0. For this pack to work on other maps, its creator must include the required log files in his map, if he so wishes.

Remember that these factories have been created from the animal system used in the game, so their operation is not everything real that I would like, so I ask you for a little patience with this model of alternative product productions.

Important: Keep in mind that the game is limited to “10” the number of animal stables placed within the same game, so the sum of stables and factories can never be more than 10. I recommend that the number of factories and animal stables do not exceed “8” at the same time and if you do not have animal stables in place, never more than 6 factories per At the same time, this can create problems in your game. Sell ​​stables or factories pre-installed on the map you are playing on before placing one of this pack, to avoid mistakes. I also recommend saving your game before proceeding to place a factory to avoid losses of progress in your game.

To be able to start the factories before you must activate it as if it were an animal stable, you can find the triggered to activate it on the right side of each factory.

These factories can be sold as if it were any other placeable building in the game, that if, keep in mind that you must completely empty the factory before being able to sell it, both of the raw material and the pallets produced. Once the factory is completely emptied, you must deactivate it by returning to the place where it was activated, as if you were going to sell an animal from any stable.

IN SEASONS TRANSLATIONS DO NOT WORK, SEASONS NEEDS TO FIX THIS.

VERY IMPORTANT!! TO PLAY WITH SEASONS YOU MUST USE “GEO Production” by erShaba