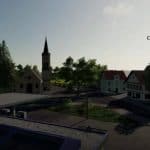 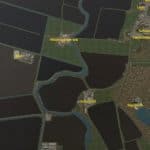 Version 1.1.8.0
Short update
New compost textures including new texture on the field
Organic waste fillType changed to be compatible with external mods.
No new savegame should be necessary, unless you have already worked with organic waste.
You have to rewrite this in the savegame.
Old fillType “organic_waste” and change to “organicwaste”

40 fields including meadows
Grass missions are available in the meadows
32 floor brackets installed
More height types installed
Standard animals were changed
Decoration vehicles are loaded directly from the game
4 playable courtyards were set up
SP – Prefabricated farms only in the “New Farmer” game mode, only buildings are loaded on the selected farm.

The remaining areas remain empty. In the other game modes, only the animal stalls, mobile silos and farmhouses are available, these were permanently installed.

SP – higher starting capital in the different game modes
MP – 4 courtyards set up in advance, i.e. each courtyard starts with L € 4,500,000
MP – The yards are empty except for the animal stalls, silos and farmhouses
MP – animal stalls are allocated to the MP farms, i.e. courtyard 1 quarters in the area of ​​courtyard 2 where there is a stable, but then cannot use it!

Productions that run through GlobalCompany have been built in, some are fixed and others are integrated into the map as placeable mods.

Mod vehicles are integrated in the map, e.g. the two milk tankers, which can transport all liquids on the map.

If you want to have animals in advance and do not have everything in stock for feeding, you can buy them in bulk on the map.

Lime can be brought onto the field on the map with any 3-point spreader, a mod spreader is not absolutely necessary

Compost is built in, this can be produced with a special silo and distributed as fertilizer on the fields with the manure spreader

more Decorative FoliageLayer for painting with lettering, so that you can better recognize what you want to paint

Carrots and onions inserted as alternative earth fruits
You can choose your starting yard during the loading process
PrecisionsFarming built in, i.e. the map has its own soil types GEO
Seasons ready

Objects:
– stationary Jenz Hacker from Stevie
– Sawmill from the MultiMap by LS Mapping Team
– new decoration on the windows and light settings from BPG_Strubi69

New types of fruit
– Renewable clover and alfalfa TheAlienPaul
– Onion and Carrots Textures by OxygenDavid
– Rye and triticale from the Geiselsberg
– Unfortunately, I don’t know who spelled it, it was removed from another map.

New fruit textures from EribusMod for LS19 – farming simulator In Tunxdorf the years have not gone by without a trace, a lot has changed. The map was not converted 1 to 1 and it was not my intention.